When I was tucking my youngest into bed the other night, in the dark she asked, “Will you tell me Sydney’s Sunflower Story again?”

The other morning, I was taking my daughter to the doctor first thing.  Knowing that we would be close to the neighborhood of a good friend, I called her to ask if she would be seeing Sydney later that day. I wanted to get some fresh sunflowers to her, and knew now that I was dealing with a sick child, I’d be unable to see her myself for a while. I did not get a response.

Once back home and settled in, I got the call that she was in fact heading to see our sick friend who is in a palliative care facility 30 minutes a way. I asked her to give me half an hour to scribble a little note and go pick up some flowers.  I raced to the local grocery store where I had seen the beautiful sunflowers the week before and wanted desperately to get them to Sydney, who has been cooped up indoors for way too long.

I scooted into the store and saw a woman with her back to me. Her arms were loaded down with sunflowers and there were few left in the display canister. I became very angry and possessive walking up to her, until I noticed her blue jacket and name tag. She was the manager of the floral department. She felt me hovering and turned to ask if I needed help. I told her that I needed a bouquet of sunflowers, and she responded that I was in luck. She had just marked them down.

As I walked over to the counter, I realized that she could cut them for my vase that I had left in the car. “Would you mind cutting them to a good length for me if I run and get my vase?”, I asked.

“Sure, dear,” she said in a grandmotherly way. I was now getting very excited about my good fortune. Left to me, they would have gone to Sydney leggy and clumped.

When I returned, she began measuring and cutting. Casually, she asked me what they were for. I never really know how to answer this question. It has become very personal, and to the average onlooker there are just no adequate words.

I took a deep breath. “They are for a sweet friend of mine, who is recovering in a palliative care facility from complications with her brain tumor,” I said.

“Oh,” she responded. She got quiet and continued to work. As she shaped them, my vase began to transform. She then asked, “Does she have any children?”

I hate this part.

“That is looking AWESOME!” I said. “Do you happen to have any ribbon?”

She turned her back and began to dig deep into a cabinet. She set two ribbons on the counter. One was yellow with orange and pink stripes. But the other one I picked up, and held in my hands.

She turned to get some other choices for me and I said, “Oh, no. This one. The one with the butterflies on it is perfect.” She smiled. And I said, “This is her. This is Sydney.”

She took the ribbon in her hands and began forming an intricate bow. She seemed to be lost in thought, and I heard her say barely audible, “My mother died of a brain tumor.”

As she worked with her hands, it stayed quiet.

“You are a very good friend,” she broke the silence. She smiled at me, and placed the tasteful, ornate bow into the vase. “It’s just so hard,” she added.

“Thank you so much, Mini” I said, noting her name tag. I could tell that this project was not just for me and Sydney. It was for her as well.

As she continued to work, she told me about the type of tumor her mother had. She told me how it mercilessly wrapped itself around the back of her brain. She said that it was inoperable.

As I reached for the bouquet, she grabbed my hand gently and said, “Wait a minute. I have something else.” She went around the corner and began digging in a box with her back to me. She then turned around with a beautiful, very realistic butterfly the size of my palm. Had I not seen her pull it out from storage, at first glance I would have thought it real.

“Wow! Mini! That is Amazing!” I exclaimed. She smiled and worked some wire around the middle of the orange butterfly. She then fastened into the center of the largest, tallest sunflower of the bunch.

I was speechless because Mini had no idea that four weeks ago, I had given Sydney this photograph as a gift to let her know how I see her. And will always see her. 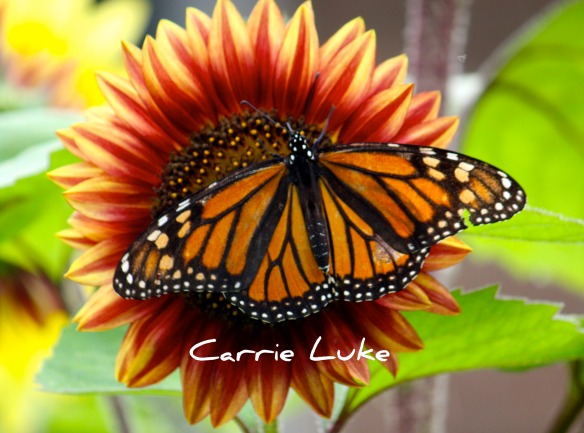 I was also a little worried because I didn’t have much money to spend on this arrangement. Though I was positive that I was not going to leave without it.

“There,” she said satisfied. She turned her back to print up the price tag.

I didn’t want to look at what it was going to cost me.

“Thank you, Mini. This is going to be spectacular in her room. I hope you have a good day,” I said.

“You’re welcome,” she said. “She’s very lucky to have you.” She smiled wistfully.

When I took the arrangement to my friend, for transport, the first words out of her mouth were…..”Carrie!! Those are amazing. That is way too expensive.”

I thought to myself that it did cost a lot. But, not in dollars and cents.

I looked at my youngest barely able to make out her face in the dark that night after the telling of my tale.

She said, “Mom. Do you think we could go and visit her sometime?”

“Well, I don’t know if they allow children where Sydney is, honey.” I said.