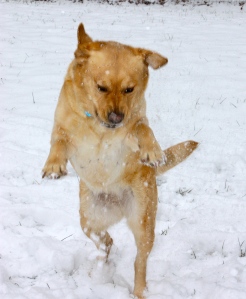 Lucy, our yellow lab, does not like the cold. So, it takes mere moments before she throws herself at the kitchen window to let us know she has had enough of the outdoors. I don’t mean she taps at our kitchen window. I mean she tries to impale herself.

Last month, while conducting my morning ritual of tea and breakfast making, I ushered her out the door into the back yard. I went about my tasks, ate breakfast, read to the girls, and began school before I realized our dog had yet to make her reentry desires known as expected. I got up, looked out the window to see that the back gate had been left open.

Her going on a “walk about” doesn’t particularly unnerve me because much to my husband’s dismay, she usually returns. But, I do worry a tad as we have a woman two doors down who LOVES her outdoor cats. And she has a lot of them to admire.  With a horrible coincidence, “terrorizing the feline” happens to be Lucy’s favorite game.

I opened the front door and called her name. There was no sight or sound of her. Years ago, I learned the degrading futility of trying to chase her when she gets out.

It was an early spring morning, I was still in my pajamas and bare footed. Panicked, I followed her to the cat lot. I had her leash in hand which ensued the most ridiculous comedy of errors that I have ever had the privilege to be a part of…although it was only funny to the onlooker.

First, she had me chasing her around the woman’s parked car. I went one way, and Lucy went the other. Then she would stand still until I got close enough to become over-confident. At the precise moment my hand reached her collar, she took off again. Smirking. Laughing at me over her shoulder.

Desperate, I had to go all in and vigorously hounded her around this woman’s back yard which then led us into the woods. I cackled maniacally while chasing her.

I don’t know if you have ever tried to catch something that hasn’t the least intention of being trapped, but there is very little dignity in the effort.

Finally, after about 10 minutes,  I looked at my dog and yelled, “Forget you Lucy!!” I turned my back and started to walk home, not caring if in minutes or hours she would be raking a tin cup across the bars of a doggie prison for cat killing.

It took 5 seconds until she was following me home assuming our play time was over.

So, I don’t go after her anymore.

But, her return this day was taking longer than normal. I called her name, and whistled out the front door. Then my youngest gave it a try. We waited and nothing happened.

My oldest put down her book, got off the couch, and said, “I got this, Mom.”

She walked out the back door onto the screened in porch. She put her hands around her mouth and in a high-pitched voice, hollered, “Dinner!” “Lucy, you want some dinner, dinner, dinner?”

All of a sudden, about 200 yards away, my youngest and I see a yellow blur shoot out of the woods. Lucy comes tearing around the neighbor’s house at light speed. She jumps up onto the front porch and tries to stop at the door. But because of her tremendous speed, she slides half way down the porch. She gathers herself, runs into the house and goes immediately to her food bowl.

The Prodigal returns. No need for a fattened calf.

1 thought on “The Prodigal Returns”