I realize that is not much of a crime….stealing a brownie, as we have all been known to pinch a few desserts in our lives when no one was looking. But the “Brownie” i am referring to is no tasty sweet. The one who draws out the sticky fingers in me, just so happens to be my youngest child’s favorite bed time buddy.

Brownie came to live with us when my daughter was a few days old. One of my best friends at the time had just had a son 6 weeks prior to the birth of my baby girl. While in the hospital delivering her baby, she encountered some serious complications that left her in the cardiac wing of the hospital.

I went to visit her often, but felt nervous and scared. Someone had given her baby a stuffed ‘puppy.’  It was soft and comforting to hold while sitting by my friend’s bed side as  she was caring for a new-born and a new heart condition simultaneously. I would often joke that they needed to pat me down before I left to make sure I hadn’t smuggled ‘puppy’ out of the room. Really, I have very little scruples when it comes to this type of thievery.

As my friend recovered over the next few weeks, we welcomed the birth of our second daughter. Her baby gift to my sweet girl, was a stuffed puppy. Not THE stuffed puppy, but A stuffed puppy.  At first, Brownie was merely a piece of the landscape. After all, nothing was more interesting than her big sister. 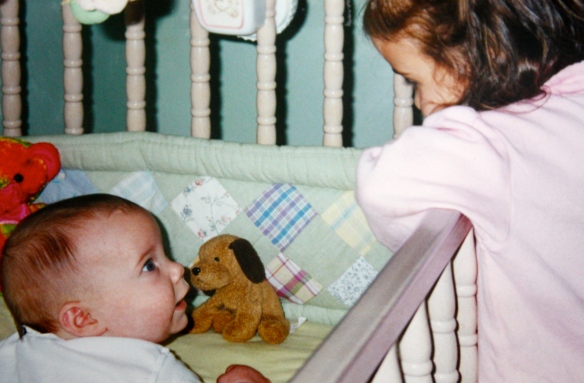 But as she got older, she discovered Brownie and they became very close.

Since he is the one she has slept with for almost 9 years, Brownie has her smell which is one of the things that draws me to him. At a certain point, your children get too old to be sniffed, squeezed, pinched, and smooched. They begin to get all of these different opinions on when, where, and how you can display your affection for them. Which is why sometimes, it’s nice to outsource.

Every night before my daughter goes to sleep, we make a “Brownie Bundle” 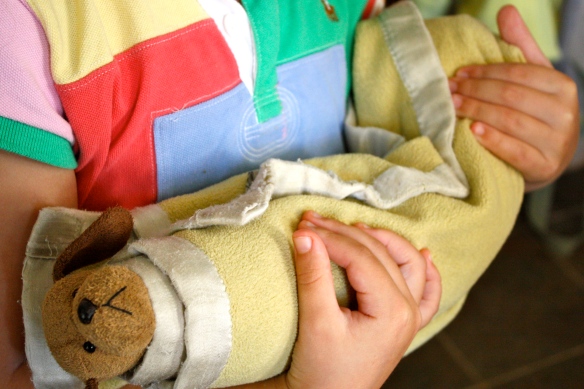 which makes for easy snatching cuddling.

The other night, while having dinner with some good friends, my daughter told the story about the night when I may or may not have taken Brownie from her while she was sleeping.

During the Christmas holidays this past year, she and I shared a sleeping pallet while traveling to see family. I woke up in the middle of the night and just saw the bundle laying haphazardly off to the side….uncared for. So, i grabbed it, snuggled up and went back to sleep. That morning when we woke up, my daughter looked at me with her stuffed animal and said incredulously….”Mommy! I woke up last night and couldn’t find Brownie!! i was scared he was lost!”

My friend, Ben, then looked at me and said, “So, basically if someone asks me to give a character witness on you…..i need to say that “she steals stuffed animals from children.” 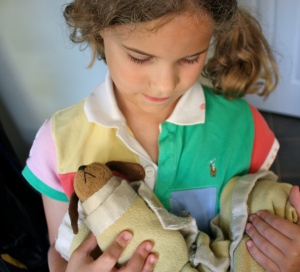 4 thoughts on “A Brownie Stealer”