i think people can be summed up in one of two categories. Either you are beach goer or a mountaineer.  i myself am the latter. and though i do love sitting in the sand and listening to the constant lulling of the waves, i always long for the greenery and solace of the mountains. My body and soul immediately relaxes once i enter into the  canopy of a deep forest hiking near a brook. i mean, if there are no bears in the area then i immediately relax.

We just spent a week at the beach. It was beautiful. But i was constantly amazed as i watched my girls being drawn to play in the ocean as if caught in some gravitational force. I myself am immune to its wooing. I cannot even be guilted into getting into the ocean and that is saying a ton. I have matching luggage for all the guilt trips i’ve been on in my life. So, i sat with my book far from the shore and was purely astounded by their fun and frolic.

It’s not that i can’t imagine that the ocean can be fun. I kind of understand how waves and boogie boarding can amuse. and i’d like to think that even i enjoyed it at one point in my life. But even then my memories are more a kin to jedi mind tricks trying to convince me that there was fun to be had wading around in a gigantic shark and jellyfish mine field. Like the time, i packed my small duffel bag for an overnight guilt trip and waded into the water at Amelia Island. I was probably between the ages of my girls now. My sister and i were ‘having fun’ and all of the sudden she began screaming with fright and pain as she picked up what looked like an old fishing net. She then flung it in her hysteria and it peppered me across the neck and chest like i had gotten caught in a crossfire. We quickly got out of the water and found both of us covered in big, red itchy, painful welts.

And though i have several joyous stories of being pulled out too far by the undertow or having to have burning and suffocating salt water pumped out of my nose, i think the final nail in the coffin so to speak was when my husband and i were at an aquarium in Wilmington about 12 years ago. They had a very impressive shark exhibit. I asked the guy working there where they got all of their sharks. big mistake. He said matter o’ fact, “Oh we pull ’em out of the water right out there.” He was pointing to the beaches along the North Carolina coast. Then he said, “If you just ride above the surf in a helicopter, you’d see ’em all.”

Clearly, i have not given my girls any of this pertinent information, though my oldest came across a couple of jellyfish on the beach during a stroll one evening. She’s no dummy and quickly calculated where they had washed up from. But, she unlike her mother was able to compartmentalize her fear and was rewarded on our last day with a boogie boarding run that was nothing short of spectacular. Even she said, “mom, that’s the perfect one to end on.”

It was a great lesson for her in overcoming fears in order to get the most out of life. in order to truly live. And though, i am satisfied and content not ‘truly’ living when it comes to the sea, i promise you, letting go and allowing and encouraging my girls to wade out into the unknown where i cannot see the bottom, is a fear i must overcome everyday. 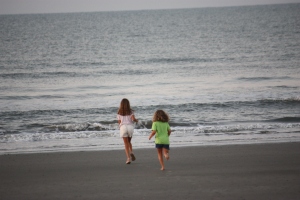 3 thoughts on “A Mountain Girl”